The basic premise of generating eWay Bill for inter-state and intra-state transportation of Goods is to eliminate the chances of tax evasion. The Eway bill lowers the chances of bribery and corruption and ensures smoother and efficient transition of goods across the nation.

However, many a times, businesses either fail to generate EWB or do it in a wrongful manner which attracts penal action. We hereby list various scenarios under which the registered person can be penalised for non-generation of eway bills.

The authorised personnel can penalise a registered person or the consigner with a fine of Rs. 10,000 or the amount of the tax being evaded, (whichever is greater) if the person was caught

The given penalty can also be extended to Rs 25000 if the registered person is caught acquiring possession of, or in any way concerns himself in transporting, removing, depositing, keeping, concealing, supplying, or purchasing or in any other manner deals with any goods, which are liable to confiscation.

Contravention of any provisions of this Act or any rules made thereunder for which no penalty is separately provided is penalized under General Penalties. 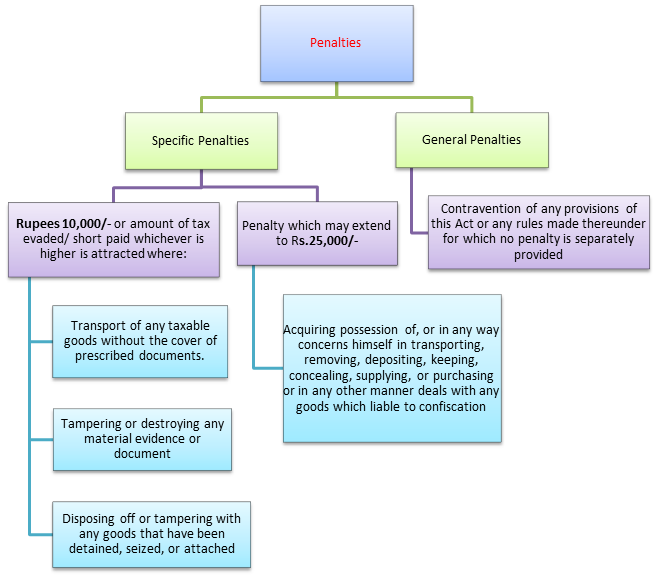 The authorised officer, upon the observance of any discrepancy in the E-way bill or the absence of a valid E-way bill, has the rights to detain the vehicle and seize the goods. Merely detention and seizure doesn’t end the matter, further to this, the “Proper Officer” detaining or seizing goods or conveyances issues a notice specifying the tax and penalty payable and thereafter, pass an order for payment of tax and penalty under clause (a) or clause (b) or clause (c). The goods can be released upon the payment of appropriate taxes and penalties, which can be accomplished in the below given ways:

The detained person can also provide a security bond in the form of bank guarantee that equals to the total penalised amount to the authorised officer.

No matter how stringent the Law & Orders are, there is always an “Opportunity of being heard” given to the person concerned. Also, on payment of amount referred above, all proceedings in respect of the notice specified herein shall be deemed to be concluded.

In case of failure of payment of the amount of Tax and Penalty, as stated above, within seven days of such detention or seizure, further proceedings shall be initiated.

However, if such products which are detained or seized are perishable or hazardous in nature or are likely to depreciate in value with passage of time this seven day period may be reduced by the “Proper Officer”. 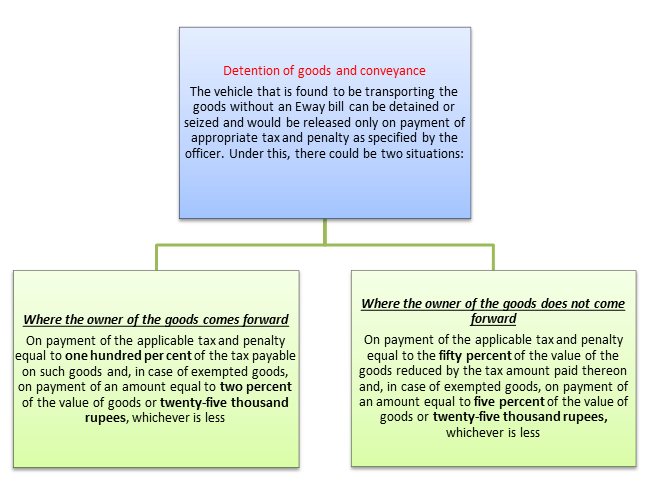 If the registered person or the transporter fails to pay the implied penalty within 7 days, the authorised personnel can seize goods and/or the vehicle, and begin legal proceedings for the same. Upon confiscation of the goods, the ownership of the seized goods will be transferred to the central government, which on 3 months of confiscation can be auctioned by the authorised personnel and give the proceeds to the Central Government 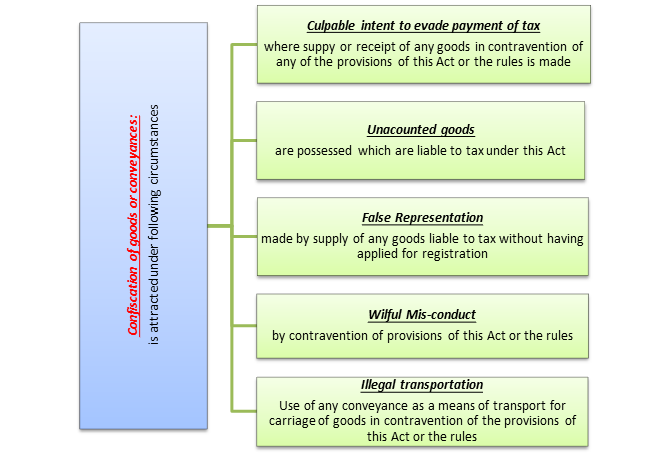 What you can do?

For every Law and Order, there is a saviour counter provision, giving a little relief to the concerned person. Accordingly, in the event of confiscation, the officer adjudging the confiscation shall give an option to the owner of the goods to pay in lieu of confiscation, such fine as the said officer thinks
fit. However, the fine levied shall not exceed the market value of the goods confiscated.

However, the penalty in such case should not be less than the amount of penalty levied under the provisions of Detention and Seizure.

Prevention is better than cure!

We recommend timely generation of EWay bills to avoid future penalties and fines.

IRIS Topaz is a smart E-way Generation Platform that helps you manage your Eway bills, right from the generation to its expiry. It is user friendly, self-explanatory and economical to operate. The web portal can be accessed at https://esp.irisgst.com/ while IRIS also offers a bulk E-way bill generation desktop utility. Features of IRIS Topaz:

To know more, about IRISTopaz. For demo or any other queries, you can write to us at support@irisgst.com

Anushree Joshi is a Senior Domain Specialist in IRIS GST team and is responsible for product development and customer success. She is a Chartered Accountant, Cost & Management Accountant and have been associated with IRIS for 7+ yrs. Prior to joining the IRIS GST team, she was part of the IRIS US SEC XBRL team, helping listed companies in US file their annual reports in IFRS and US GAAP. She enjoys reading and a Kathak (Indian classical dance) enthusiast.